I wrote an article for Random House’s website “Word and Film” – you can find it here.

or read it below:

“I have a confession. I have a secret crush on a teenage vampire.” It was four years ago when my friend admitted this to me as we watched our kids climb the monkey bars. Needless to say, I was intrigued.

Shortly after, she came over to my house and the minute she walked through the door, she put a book in my hand. It was a well-worn paperback with a pair of pale hands holding an apple on the cover. My life hasn’t been quite the same since I read it.

Like so many other fans of Stephenie Meyer’s Twilight, Edward Cullen captured my heart and my imagination. The author not only brought me into her world of vampires, wolves, and humans, but inspired me to design some vampire-esque knits and put me on a journey that led to me publishing my own book, Vampire Knits. Vampire Knits has twenty-eight knitting patterns all inspired by vampire stories. The book not only allowed me to share my dual love of vampires and knitting with readers, but it has led me to meet so many wonderful people – in yarn shops, book fairs, and even Comic Con – who share these same passions. I like to think I’ve even turned a few vamp lovers into knitters.

I’d always loved vampires, but there was something unique and magical about Twilight that inspired me unlike anything else. Ms. Meyer’s vampires sparkled instead of bursting into flames, they kept a civil treaty with wolves in neighboring territory, and they felt fascinatingly modern. Most of all, Twilight was a love story I could relate to.

This week, “Breaking Dawn: Part 1,” the final chapter of the Twilight Saga, will be released in theaters around the world. I’ll be in the theater with the same friend who introduced me to the series – it’s our ritual. We always watch the movies together. I’m excited to see how the last two installments will come together, and how they’ll separate the last book, Breaking Dawn, into two stories. I can’t wait to see the human girl become the vampire instead of a meal.

One thing I’ve been doing to get ready for the movie release is knit. I’m knitting the gorgeous Lore Hoodie (designed by Cirilia Rose), which appears on the cover of Vampire Knits, to wear to the premiere. Like Edward, it’s beautiful and mysterious and a little fancy.

I have a confession. I have a not-so-secret crush on a teenage vampire, and I can’t wait to watch him marry an ordinary human girl on November 18, wearing something I knit from my own book. I will wear my Lore Hoodie with pride, knowing that it was inspired by the very characters up on the screen. And while I’m a bit sad that the saga is almost over, I know that the story will always live on, between the pages of the books, on the screen, and in all the items that I’ve knit.

I frogged my entire knitting project – all 20 rows. Here’s where I was last night at my daughter’s soccer practice. I’d better get knitting!! 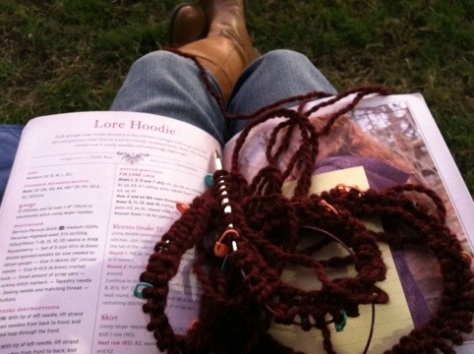